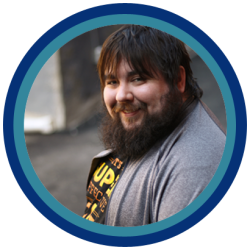 As seen opening for Nikki Payne, host of the FUCC Thursday night Wilser’s Room open mic, host of The People’s Comedy Night in St. Stephen, The Roast of Shane Ogden and The Roast of Jon Forward, Every Comedian in New Brunswick, Chuckles Comedy Club, Yanucks and more.

Born and raised in St. Stephen NB, Brian came to Fredericton to get a degree in the only job that makes minimum wage you need a degree for, Early Childhood Education. Now a happily divorced father of two amazing boys, Brian has continued on with his hatred of money by becoming a comedian.

He’s performed in Calgary, Toronto, Stratford PEI, but mostly right here in New Brunswick where he loves it the most. He’s “The Nice Guy of New Brunswick Comedy”, or so they keep telling him.